Roots of Empathy: Introduction ... an example of the resolution of loss of empathy

Roots of Empathy is an evidence-based classroom program that has shown significant effect in reducing levels of aggression among school children while raising social/emotional competence and increasing empathy.

Kindest regards
Corneilius
Do what you love, it's Your Gift to Universe
No comments:
Email ThisBlogThis!Share to TwitterShare to FacebookShare to Pinterest

I will present to you an example of what I describe as a clear articulation of where responsibility lies for changes regarding what I call a socially accepted unacceptable behaviour. Indoctrination. 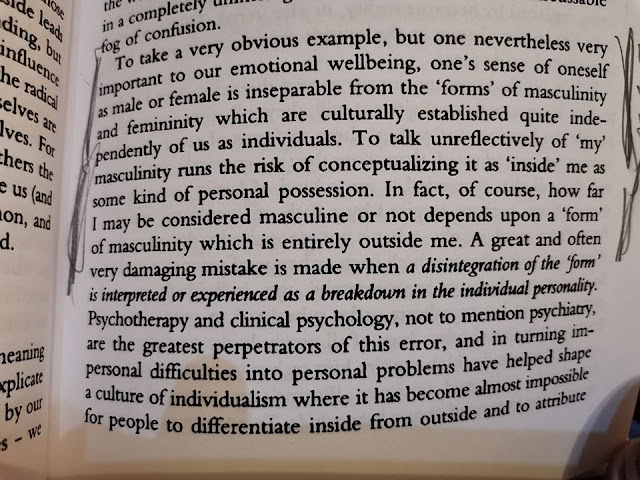 This beautiful insight was written by David Smail, in his book "The Origins of Unhappiness - A New Understanding of Personal Distress"

I think this book ought to be required reading for every teenager, before they leave school.

This paragraph is about where the locus of a problem really lies.

It is not that some people make up a story and then claim that they feel gender in their own way, and that this is a problem to be solved - it is that some authority in society determines gender must be felt in a given way, as prescribed, as pre-written by the culture, which is external to the person and that the person must conform.

We  are conditioned, we are expected to internalise the external description and assumptions of the culture as if it came out from us. My true sense of being male or female emerges from within me. It is not what I am told being male or female should be by others. It is what I feel, and it is there before words are used to express it.

Racism is another example.

A blind person of any human skin tone, meeting other blind people of any other tone will notice no difference. Why do those who see, notice a difference? Because they have internalised an external definition. They are no long feeling who they are, they are feeling who they have been told to feel they are.

It's crucial to be very clear in this regard, because there are many distracting threads that lead away from this, that get bogged down in sectarianism, misapprehensions and disinformation.

White people who wish to confront Racism must speak to those white people who promote race as a distinction, and make it perfectly clear that the Racists are the ones who must make the change.

When the crowds protesting and demonstrating are white majority crowds, demanding that education tells the truth, demanding that systemic racism be outed then the problem is being moved to where it can be resolved.

Here it is in another form.

“The problem of the girl in the city is a male problem.

If she is deprived of her fair share of environmental contact because she has household tasks which her brothers are able to evade, the answer is a more equitable sharing of these task within the family, especially since her mother, too, probably feels oppressed by the same assumptions.

If it is because of a patriarchal religious tradition, the patriarchs have to change.

If it’s for fear of sexual exploitation it is the exploiters rather than the girls who have to change their ways.

And if the liberation of girls brings in its train an explosion of female crime, it is the equation between bravery and anti-social acts that has to be broken.

The environmental liberation of girls, far from implying the girl in the city should become hard and tough in the way that the boy in the city aims to be, demands that the boy, too, should pride himself on those allegedly feminine qualities of care and tenderness.”

This paragraph demonstrates the kind of clarity that is required when addressing a problem, it’s symptoms and it’s causes. It is that the causes that must be recognised, for only then can the appropriate responsibilities for resolution of the problem be determined and assigned. That last line is the finale. If the liberation of women is to be realised, then the tenderness and care in men must also be liberated from current alpha male dominance.

I am concerned with the harms that are caused in Compulsion Schooling (and elsewhere in Society) - one cannot bat them off by pointing at the successes and then use that to minimise the meaning and value of the harms experienced, as people do, reflexively,  to protect the Institution and other 'sacred cows' from accurate and constructive criticism. That is irrational nonsense.

In school children are punished or sanctioned when they 'make mistakes', or 'give wrong answers' and so children learn to avoid making mistakes, children adopt a policy of playing safe, children learn very early on to manipulate the situation out of fear.

Twelve years of fear of punishment, fear of public humiliation, conditioned by witnessing the punishment of others, on a daily basis - the top of the class, the bottom of the class - with no let up as such, is quite a fierce conditioning. It has impact at neurological and hormonal body system levels that are invisible, yet no less affecting for that.

The utility of this conditioning to the system of Power, which dominates State Schooling, is that in this state of fear, children will have their brakes on. Rather than seeking their most alive and fullest expression, children seek approval.

That way the Authoritarians can keep up with children, otherwise the child would outrun and outwit them, the children would create better, more reliable and more sustainable outcomes, because that is our true human nature - to share and contribute at peak creativity - and all would share as much as one could, until exhaustion or satisfaction brings matters to rest.

Because it is so much fun, and so rewarding to be fully alive and creative, to contribute one's whole being. Who needs private profit within such a healthy dynamic, the dynamic of the healthy egalitarian?

This is what most terrified the early Industrialists and their inheritors, and still does to this day. What those early ‘entrepreneurs’, those ‘ barons of Industry’ who spent 100 years or more deploying vast resources to the project of bringing in worldwide Compulsory State Education wanted most of all was to ensure that no serious competition could emerge from the working, labouring classes of people.
Justice is portrayed as happy obedience, in a Utopian Industrial World.  The Utopia of undisturbed dominance.

Likewise the so-called 'great Religions'. They publicly declare to strive for the myth, the ideal and yet they justify the morbid reality - the poor will always be with us - as a natural dynamic, ordained by God and fate.

They do not give their money for concern for the welfare of the people of the world. They give charity to assuage our indignation at the very existence of poverty. Their status as paternalistic rulers is to be accepted at face value,  and must remain unquestioned, most often because that status is assumed to be God given.

The Violent Hierarchies gave their support to both these projects - Religion and Educational Indoctrination - which continues to this day, because they wanted to avoid the ‘wet’ business of Empire.

They previously found it necessary to deploy extreme violence, but it was also somewhat dangerous, people could and did fight back. It was distasteful to a larger population and very bad for their image, which they cultivated assiduously, through pomp, circumstance, monument and ‘charridee’.

The Authorities wanted a psychological control to replace the brute force control.

They wanted Statism to become a Religion they could manage.

They sought to shape all the children of the Nation, rather than respond to who those children were.

They sought to shape the mind of the nation, as a homogeneous accepting whole, with permitted dissenters – who will always exist -  reduced to arguing amongst themselves, in a lateral exercise and  thus remaining ineffective. Left/right adversarial politics. What a useless dynamic in terms of generating rapid healthy change.

And it is this toxic relationship between adult and child, where the one with Power sees him or herself as the shaper of the one without Power and uses any and all means to effect that shaping, and discounts the adverse outcomes and costs to the child in favour of the ideal - a compliant citizen.

It is this toxic relationship that permeates racism, misogyny, xenophobia, homophobia, the disdain for disabled folk,  the dismissive disgust for the psychologically wounded..

That is the core of The Dominant Culture.

That is the taboo subject of this Culture.

One of the many long term health outcomes of childhood mistreatment, of childhood's where the child experiences humiliation, neglect and abuse is obesity.

Another is diabetes. there are many health implications in later life for Survivors.

There are other factors too, of course.

And other outcomes. Addiction, heart disease, depression and a variety of chronic diseasee emerge from within a body and psyche that is placed under life long chronic stress.

These other factors cannot be used to mitigate the reality of this link, and it's implications regarding how we treat children and since this affects how our Society matures psychologically, it must be faced, square on.

All that propaganda about 'good food', 'exercise', 'diets' and Government programs to tackle obesity (like some giant rugby ball!) is designed avoid the issue of childhood trauma, and in effect it serves to it punish those who are already suffering.  And it is used to get folks to take their eyes off the ball (excuse the pun).

The shame, that same feeling noted above which arises in the child when children's mistakes are responded to with anger, shaming, derision, disapproval and so forth and so they remain unresolved, becoming internalised over time, the child begins to believe he or she is worth less than others.

All of this is avoidable, all these negative experiences are avoidable and it is the greatest tragedy of criminal negligence.