1. The Israeli Government has been at a state of war with Syria since the Golan Heights were taken by Israel, by Force, in the '6 day war' in 1967.

2. Syrian Government is recognised Internationally as a Sovereign State.

3. Saudi and US/UK inflitrated 'foreign fighters' into the pro-more-democracy movement protests (which were peaceful in intent and action). The violence started when they attacked Syrian Government police, then military. The groups attacking the Syrian Government are supported by Saudi, Qatar, Israel, UK, USA -- both covertly and overtly, Syrian was put into the 'axis of evil' by George Bush's US Government.

4. Once violence starts at that degree, the issues of democracy go out the window, The Syrian State fights to survive. It's fight is legtimate, given point 3.

5. ISIS started in Iraq, and was comprised of 'foreign fighters' and elements of the Death Squads set up by the US, through Colonel James Steele (ret) and Colonel James Coffman.

6. The pattern of Collusion or inflitrating violent militia was standard operational practice in Northern Ireland, and we know that they had agents active in stimulating violence in the IRA, the UVF and other militia. Same thing in Iraq, Afghanistan, Syria, Libya.

7. The long term solution is for US/UK and  Saudi to be stopped 'intervening' in the affairs of Arab States. The first step is to arrest Tony Blair and George Bush and all who operated with them to launch these wars against Arab States, apart from, of course, Saudi, Oman, Qatar, UAE.

At the same time, the US and UK and Sauds MUST BE STOPPED from interfering, overtly or covertly.

8. Without the honest facing of what has been done, as above, there will be no peace - 'no justice, no peace.'


9. It is pure hypocrisy of the European States to NOT take in the refugees they are part of creating. It is also cruelty, Institutionalised cruelty, and our taxes are funding it.

The Established Power Base, Corbyn and You! 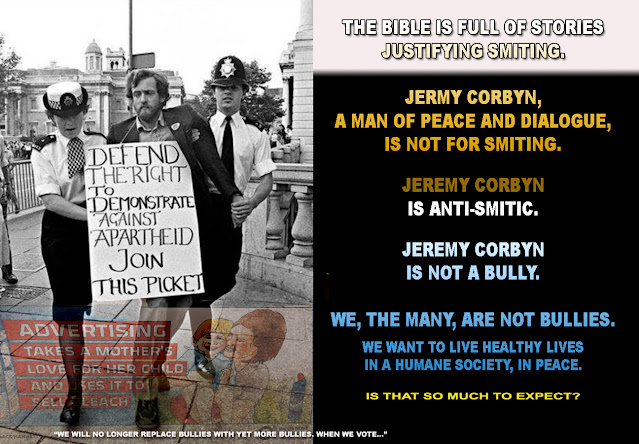 The Established Power base is not simply trying to get rid of Jeremy Corbyn, it is trying to undermine YOUR participation in political decision making - your awareness and awakening is what they fear more than anything else on this Earth.

Jeremy Corbyn merely represents that desire to participate in ways that promote honesty, fairness and justice as THE STANDARD in ALL political decision making and State Governance.

O'Donnell has stated clearly that 'recall' ought to operate at every level of electable public office, as a means to provide direct oversight and control to the grass roots.

These ideas were first laid out in some detail in The Power Inquiry​ 2006.

Ideas which David Cameron and Ed Milliband praised and then dismissed as 'impractical' without saying why he believed them to be impractical.

The greatest threat to the Established power base is not violence from 'terrorists' - it is the emergence of a grass roots actively committed to that equal participation and oversight of Government, a grass roots that is organising as I write.

From the removal of the Independent Living Fund to arming Saudi head chopping, crucifying Regime, from the dropping of clean energy to the expansion and promotion of Fracking, from the refusal to prosecute known predatory child abusers (in all main parties, and the Churches) to 'protect the state' to imposing intense examination upon primary school children, secondary school children, and ensuring University students emerge from Study in debt, all this in order to put them (and their teachers) under chronic stress.... these are all standard patterns of how Established Power operates to preserve it's position, enhance and project it's power into our lives.

If you are going to take on the system, it's best you know what you are dealing with. Be fearless, be honest, be a mature adult.

We ALL share a responsibility as adults, to each other and to all the children.... that responsibility is inherent, innate, fundamental to our healthy biology. Take it up.

Kindest regards
Corneilius
"Do what you love, it is your gift to universe."
This blog, like all my other content creation work is not monetised via advertising. If you like what I present, consider sharing my content. If you can afford the price of a cup of coffee or a pint of beer/ale/cider for a few months, please donate via my Patreon account.
Thank you for reading this blog.
https://patreon.com/corneilius - donations gratefully received
https://www.reverbnation.com/corneilius - .mp3 songs
https://www.corneilius.net - archive
https://www.soundcloud.com/coreluminous - .wav songs