Remembering : All War is Child Abuse. 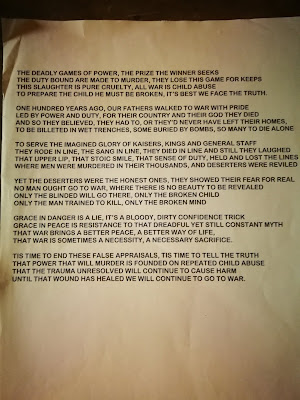 It is also a song.


I try to 'remember' - to consider, bear in mind, be cognisant of every ancestor as a general rule, I see a tree or a rock and I see the past in so many ways... aware that I am placed in a historical context, a point between what has happened and what will happen, the place of happening, which is eternally moving.

I am aware I am here because so many organisms have lived, nurtured and died. We are all here as a result of that evolution of nurturing living systems.

And in this time, Remembrance Sunday in particular, I turn towards every ancestor ever murdered in warfare, every family member bombed, every child shot in the back in flight, the terror, the pain, the loss, the grief, the disgust, the shame, the guilt, the denial, the survival,  the hatred and much else that percolated through the wounded generations across the Earths lived in spaces, everywhere, for all time, the remembered and the forgotten.

All of that vast lived experience of terror, pain, shock, disgust... it's a lot of peoples lives totally fubar. It's real. It is not abstract.
I allow myself to begin to imagine the terror, the feeling, the sense of going through all of that, and I am already shattered, monetarily.  That is terrifying. It is also huge sadness, grief and dismay. I am glad that I am only imagining, it's a kind of mental and emotional thought feeling experiment.

I imagine that then multiplied million upon million fold, ordinary folk caught up in the wars of the powerful, as in WWI and WWII, their survival PTSD interwoven with trying to make ends meet as a low wage worker-labourer, shopkeeper, cobbler, doctor and how that trauma and poverty 'informed' or conditioned all those lives of the 1910s, 20s, 30s, 40s, 50s.... traumatised parents doing their best, yet passing on the woundedness, the loss, the behavioural dynamics on unresolved trauma...

I try to see through to the ripples of effect and affect... see how that ripples through to today, how it afflicts the present, from 100 years ago and more... millenia of war fare.

And the thing is this - go back 30,000 years we see very, very little evidence of Monumental Institutional Hierarchy of Violence Culture. Kings, Palaces, Pyramids unknown.

We know that outside the areas of 'civilisation' the vast majority of static cultures had egalitarian power structures built for conflict resolution, de-escalation, trade and that nomadic, migratory, pastoral, horticultural, fisher-hunter-gatherers in the large part maintained healthy attachment bonding between mother and child - social cultures where nurture is highly valued, more valued than power.
War is a culture, rather than a sequence of discrete events.
WWI cannot be studied within it's start and finish timelines and be understood. It was another ripple in the culture of competing militarised industrialised states.... the rights and wrongs of WWI are a gaslighting exercise. The issue is the culture of warfare as a political utility, which itself emerges from hierarchy of violence culture - God the wrathful, who loves you, The Murderous State that will punish you, the Dominant Parent.
Ending the warfare culture is the work of all honest, free adults.
Human Welfare is our business here, not Warfare.
There was no sacrifice, nothing was won, the bland lies of polished brass, marching to order, wreaths and ceremony are in truth a private memorial attended by Survivors, in place of genuine care, co-opted by the Chiefs of Staff and their political masters.

The people who lived through the combat and destruction have a fraternal duty and a human  need to Remember, to bear witness to what happened, to grieve, to cry, to stand in stoic grace and to somehow integrate their experience, and be held, lovingly.

But mostly they need full support to deal with their wounds, they deserve help in every possible way no questions asked.

And most of all they need the civilians to ensure that the politicians never send future generations to go to war off shore.
I wear both poppies, none and none.

I cannot dismiss the survivors of warfaare on any side, for they are victimised by those who urge warfare, by those who glorify warfare in order to condition others to habituate to warfare.
"Peace is more than the absence of War." - Arandhuti Roy

War is only possible if a culture permits child abuse.

It requires an organisational effort to prepare children for the eventuality of  war.

Indoctrination is pretty central to the succesful prosecution of warfare,and enforcement of conquest, and ought be understood as a grooming behaviour that has been institutionalised, weaponised and deployed, in effect if not always on concert.

The vast resources deflected away from nurturing happy healthy families, safe communities and thus functionally sound societies deprives every child of those societies, and is a form of indirect child abuse.

The training of youngsters to become combat troops, to become something that they can have no experience of; the deliberate, methodical organised killing of warfare, and it's disorganisation in the field.

They have to break the youngster and rebuild, re-condition and in effect brain wash that youngster as part of a group going through the same abusive training that it's their togetherness that matters, so they all push through, as a habit, as an emotional reaction.

This is typically done between age 16 and 22 whilst the Frontal Cortext is still developing, whilst the young persons brain is still vulnerable to adverse environmental influence.

."probably the most important fact about genetics and culture is the delayed maturation of the frontal cortex—the genetic programming for the young frontal cortex to be freer from genes than other brain regions, to be sculpted instead by environment, to sop up cultural norms.

To hark back to a theme from the first pages of this book, it doesn’t take a particularly fancy brain to learn how to motorically, say, throw a punch.

But it takes a fancy, environmentally malleable frontal cortex to learn culture-specific rules about when it’s okay to throw punches.”
― Robert M. Sapolsky, Behave: The Biology of Humans at Our Best and Worst

Talking to children about Heaven and Hell is terrorism, if you can see it honestly, for what it is, without judgement, as a biological and societal behaviour pattern.

To insert into the childs mind the existential fear of hisor her own 'soul', or 'self' based on a fable through reward/sanction behaviour modification dynamics that internalise the external values into the child so that the child believes those values to be his or her own.

Look at it that way and then the behaviour can be addressed.

It's again the pattern of intruding into the child's psyche.Colonialism.

The fear the child will not choose the Religion or System on their own is great, and is a reflection of the insecurity of all dogma, all doctrine, all religious zeal and practice.

Healthy people do not go to war.

And so it goes..
The culture routinely, and understandably, ignores the meaning of the harms caused, hethe intensity and intimacy of each act of violence, each death moment is masked out. Yet it existed, and it exists, and there is no balance, no resolution to that death.

Thus the historians and school masters utter numbers, statistics, miles gained or lost, and they  speak of generals, and heroes, and the villages in between are invisible - the deaths are less than notable, and thus the war habituated quote such information in repetition, haviung 'learned' the offical narrative, only to mask the immensity of individual suffering, repeated in unspeakble intensity, by the millions, re-presented as historical sentiment  via caricature that brings tears to the eyes, the emotions of national sacrifice tended. ,

That's a big ask to feel into that immense well of pain, grief, desperation.... it's so easy to take the heroic stance...

But we need to feel into that to really understand why in a fully embodied sense we must cease our states engaging in warfare.
Hence my latest release* - All War is Child Abuse.

*See and hear above!
My argument is simple.
The indoctrination that is central to the prosecution of War is child abuse.

They are the tactical violent utility of the ruling class.

They wage war for political masters.
The waste of materials and wealth and human time, from extraction industries, to weapons makers, then the destruction wrought by warfare consumables 'market' - all of it is global child abuse.
I get that many millions of folk have lived experience of this in ways i do not, in ways I would never want to experience and that I am not 'expert' here...
I am looking at all the elements and I find nothing that exists that balances the harms experienced.
Nothing.
Nothing in war that I would 'endure' to serve Humanity. Nothing I would ask any other to bear to 'save' Humanity...
It's bullshit to claim there is glory, goodness, heroism, sacrifice in war - those are all after the fact rationalisations or pre-fight fantasies.

And a load of hyper-adrenalenised traumatised wounded survivors trying to make sense of it all.

As I understand it 'losses' in war are in fact the numbers of people murdered by a system of power, be they troop or civilian, adult or child, volunteer or conscript.

Losses to the organising agencies, whose concern with numbers of troops is rather obvious.

To go after troops who murdered people in Iraq and to avoid going after the men who organised and funded and prosecuted an invasion and war against another state?

That is an appalling act of deliberate hypocrisy, because that failure to indict known War Criminals is part of what enables War Makers to get away with it. They never go to jail.

I find it  appalling that the majority of Europeans cannot 'see' what Colonialism really costed, and still costs,

How can they not understand that a cruel dynamic generated the wealth and status we Europeans now stand on, which we were born into,

I find it appaling that we British are not strong enough to arrest our White European Christian War Criminals.

Blair is free and that indicts the entire Western European polity, straight up.

Bush is free, and that indicts the entire Industrial World. Straight up.

I say this - We remember and we PREVENT :  or it's just nostalgia and cover-up,  which is very, very stinky evil.

Go on, then, televise and broadcast the old men of 'yesterdays wars' tearing up, the young men in fresh uniform, the disabled veterans, the bugle, the wind, the seriousness of the moment, the standing, lots of standing.

But if they go to war tomorrow, if we allow our Government to go to war, to fund covert warfare, to supply active combatants in illegal Wars, in effect spreading violence, then it's just a load of political grooming gangsterism.

Just for the show.

It's not a good show.

Remember that as you go.