The Pope, Shamina, ISIS/DAESH and the UK Government.

"A Washington Post investigation published Tuesday alleges that those at the highest ranks of the Vatican, including Pope Francis, were made aware of horrific abuse allegations in three Catholic schools for deaf children but did little to punish the accused or stop the abuse from continuing.

The allegations, the first set of which emerged in 2006, led to the 2016 arrest of an 83-year-old Italian priest named Nicola Corradi, who was thought to be the “ringleader” of the abuse, according to the Post. Charges are pending against 12 other suspects, and a 14th has already been sentenced to 10 years in prison for rape and sexual abuse. 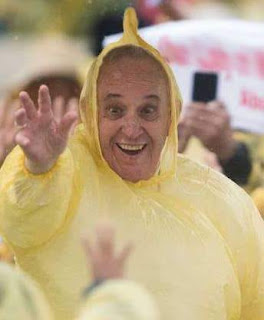 The allegations, the first set of which emerged in 2006, led to the 2016 arrest of an 83-year-old Italian priest named Nicola Corradi, who was thought to be the “ringleader” of the abuse, according to the Post.

Charges are pending against 12 other suspects, and a 14th has already been sentenced to 10 years in prison for rape and sexual abuse."


It was not possible that he was not directly involved, at an executive level, in the 'management' of 'allegations', the suppression of those who dared to come foward by enticement, bribes or threats...

Every Bishop was involved, in every Dioesces. It was institutionalised, accounted for..... 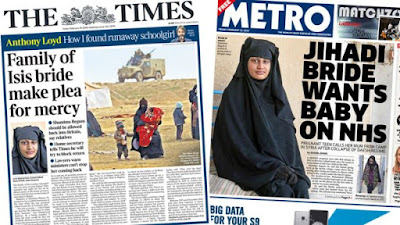 Foreign Office : "let's manipulate this heavily pregnant, groomed, trafficked girl, who is in a refugee camp, and use her to create a media narrative that is twisted - and do it to trigger, troll and mislead, to enrage and infuriate ... to encourage public abuse and humiliation for political and personal gratification.


Media consumers are being played, a minor event is hyped.

Public triggering and trolling is permitted.


"Thousands of Isis fighters have already returned to their home countries amid confusion over the number of foreign jihadis remaining in the dwindling caliphate, a new report has found.

Research by The Soufan Centre estimated that at least 425 British Isis members have so far returned to the UK – the largest cohort in Europe.

But there are fears many have “disappeared” from the view of security services, who will not publicly confirm how many returnees have been jailed or are being tracked."

Go figure, but to me it looked and felt like a medieval Witch Burning accusatory episode..

Both ISIS and the UK Government presenting a form of Patriotic Patriarchy gloating over a vulnerable, groomed, girl in childbirth, exploiting her for political gain and personal gratification.

Ugly is as ugly does.

Thank you for reading this blog. All we need to do is be really honest, responsive to the evidence we find,and ready to reassess when new evidence emerges. The rest is easy.
No comments:
Email ThisBlogThis!Share to TwitterShare to FacebookShare to Pinterest
Labels: bullyin, grooming, shamina
Newer Posts Older Posts Home
Subscribe to: Posts (Atom)