What Nelson Mandela's media death-fest means to me.

Nelson Mandela is being used as mortar to point the cracks between the bricks of Empire. As toilet paper to wash the stained, putrid behinds of Power players. As a soporific to drown out the cries of the oppressed. He cannot speak in his own defence, for he has passed away. He is being abused again.
Nelson Mandela 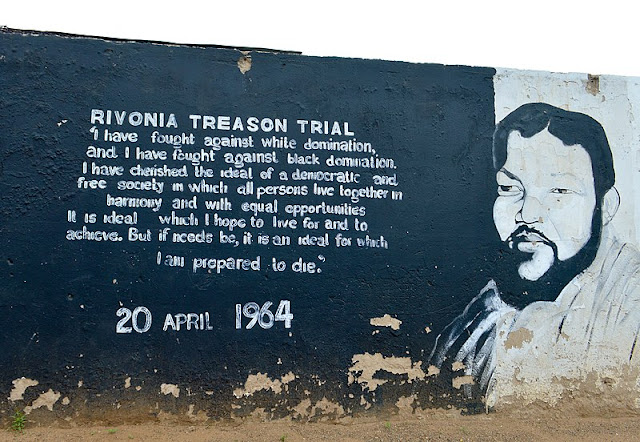 The Marikana Massacre in 2012 stands as a testament to the reality of Power in South Africa. Striking African miners brutally shot to death by Police operating under the direction of the ANC.

In much the same manner that the BBC fawned over Pope Benedict on 16-19 September 2010, during his 'State Visit' to the UK, the mainstream media fawns over the English Establishment, over the very people who have in the past expressed hatred for Mandela, yet who are now riding the bandwagon whilst pursuing policies Mandela himself described :

"If there is a State that has committed unspeakable atrocities in the world, it is the United States of America. They don't care for human beings."

What State does? Show me it. Prove it with outcomes, not with reference to slick slogans or empty aphorisms.

Bush, Obama, Clinton and Bono, Cameron and Geldof and so many others, let alone the local lads, Jacob Zuma, Cyril Ramaphosa: these are all people whose political lies have led to the violent death of others with less power, people unable to defend themselves; these are all people who have enriched themselves at others expense and who defend their positions and proclaim their own innocence.

I find the lack of critical analysis in the mainstream media to be a horror.

All the more horrific given that Nelson Mandela went down the road of reconciliation with those who had abused him, because he understood that the urge for revenge amongst people who have been dreadfully, lethally abused is natural enough and yet, for peace to have a chance, that urge must be transformed, by personal and determined daily effort, into practical pathways towards understanding, honesty and material changes.

He also knew well that those who hold Power are capable of utter horrors, such as the US infiltration of South America with trained mercenaries, special ops and armed militia sent in to undermine democratically elected governments who failed to toe the line, who dared to claim the resources on their lands as their own 'strategic resources'. Such is the nature of the powerful abuser.

That those who were the abusers - the owners of the 'strategic resources', gold, coal, oil, silver, diamonds, platinum etc - manipulated that insight, that gift of Nelson Mandela to his country and to ALL the people of South Africa, that example of empathy and kindness, to preserve their economic power knowing it would mean that many, many millions of innocent people's lives would be adversely impacted, reveals a lot about those people and the institutions they utilise to preserve their grandiose and narcissistic 'civilisation'.

I find the mainstream media to be implicated in the abject failure of representative democracy as a tool to mitigate the effects of free-market economic ideologies (wealth hoarding at the expense of the vulnerable) and religious fundamentalisms (indoctrination of defenceless children and aboriginal peoples) and it's stealthy lack of genuine, meaningful support for those whose vulnerability is being abused by these two Institutional threads of greed - the greed for power and money and the greed for power and souls.

Not least because few journalists are capable or willing to look at the psychology of the Society they are a part of. They dare not go there. They dare not even look into their own internalisations, and so they project onto the world their own opinion and describe that as reality and attack with 'ad hominem' those who would try to reveal it for what it is.
Snowden, Dr. Kelly, Manning, King, Nigella Lawson - that odious video is an attempt to distract from nature of the throat holder she co-habited with, and what that whole scenario really means.

None appear able to engage with history as a psychological study of intergenerational behaviour patterns that emerge out of trauma. So the past becomes irrelevant other than as a foot note, an aside, a curiosity or a justification for more abuse, based on the idea that that the historical abuse was so much worse and what is happening now is mild in comparison, and represents an improvement.

History as it is taught in schools is being utilised as toilet paper... to wipe clean that which has stuck, stinks and is deemed unpalatable for inspection.

None are willing to do more than repeat official lines or adhere to their editors instructions (the media version of the party whip) and offer their opinion (most opinions are useless when facts are the issue, because they reflect personal prejudices and are not journalism in the sense that democratic journalism is functional when it investigates power, and reveals what has been found, in such manner that the reader can grasp the basics of any given subject and then make informed decisions on how to act).

The entire thing is disgusting.

For me, the new age movement is dead, it is all deadly and incredibly boring. Dull as. False Hope has been beautifully packaged, wrapped in finery and sold as a way forwards, when it is backwards, insular and ineffective in bringing forward healthy activism.

It is as dull and unimaginative as is the concept of civilisation progressing, in some linear fashion towards an ideal, which is so often the claim of Power and those who are comfortable because they occupy a position of relative ease within the Power dynamic.

Taking up an aboriginal culture's philosophy as something to facilitate healing, or drive change with, is meaningless. Pacha Mama is not my word. The Vedas are not of my time. Ubuntu is drivel, when it is spoken by Europeans who refuse to acknowledge the truth of their own culture.

The dysfunctional myths of other cultures are irrelevant to my life.

Aliens are pointless distractions. Ceremonies are futile. Conspiracies are real and the theorists are un-realistic and unwilling to do the work that needs doing, not least on or within themselves, let alone in following the path that Nelson Mandela took. He had to dig deep to go where he went.

Eco-tourism is extravagance wading through the oppressed. High Culture is propaganda.

Unless it is with all the children, all the innocents, all the wounded, every single last one of them, not least the child within each adult, that personal place of vulnerable innocence, taking sides leads to sterile debates and furious that are a debasement of discourse and learning. Someone wins, someone loses: that is not a balanced situation.

If you think Facebook or your favourite bulletin board and the trolls are bad, try your media, your papers, your pubs, your pop music, your scriptures. It's all an abhorrent falsified performance of avoidance. Real addictions are painfully meaningful.

For me the dominant culture of power is boring and deadly, it is incredibly dull, severely and intentionally limiting, it is putrid, utterly rank, it stinks and is probably beyond being compostable. Useless.

That's what I get from the media reporting on the death of Nelson Mandela.

Of course we all have no choice but to live in this sewer that calls itself a high culture : we were born into it, we had no choice. I am so fortunate that my place in the sewer is relatively comfortable. I am so lucky I was not born in Iraq, Gaza, Palestine or Soweto or a council sink estate in the UK or a run down area in Detroit, where the neglect of power and wealth is real and the people who are suffering are blamed and pilloried for their suffering as though it was entirely their fault.

And so I praise the life in myself, the beauty in you, and in all people, the generosity of spirit I see all around, which thrives in spite of, not because of, that culture of Power.


Here are two songs that celebrate you and I.


Expectations of Every Child....