The Virus will eventually force governments to adopt Elimination Strategy.  Duty of care is a universal value and ethic of every Government, even if some fail to meet that measure.

The Virus is stronger than neoLiberal Free Market Governments and their mismanagement of local epidemics, and the global pandemic.

Vaccines reduce severity of some aspects of acute disease, but do not appear to reduce long-covid occurrence. Vaccines quite clearly do not impede transmission. Thus vaccines on their own may reduce some of the harms, but used alone or as the primary intervention they will still allow the virus to persist in the community, with the potential for vaccine escape variants emerging ever present.

Every country that allows spread is creating the conditions the virus thrives in.  Johnson and Javid's assertion that they hope that rapid mass infection now will prevent a greater surge in the Autumn is lethal venal bull shittery.

Anti-social, anti-scientific nonsense. #JohnsonVariant #ZerroCovid
Every Government that delays implementing an effective elimination of community transmission loses legitimacy by that delay, on a daily basis. Illegitimate government has only the option of force and guile to remain in power. Crunch time for Western Industrial Democracy lies ahead.

Mike Ryan, WHO director, puts it bluntly, answering a BBC journalist.
Here's why - Lancet article  : Mass infection is not an option: we must do more to protect our young

"We have previously pointed to the dangers of relying on immunity by natural infection, and we have five main concerns with the UK Government's plan to lift all restrictions at this stage of the pandemic.

1. First, unmitigated transmission will disproportionately affect unvaccinated children and young people who have already suffered greatly.
2. Second, high rates of transmission in schools and in children will lead to significant educational disruption, adding to and  exacerbating chronic stress amongst pupils who are already presenting with clinical mental health problems in growing numbers.
3. Third, preliminary modelling data suggest the government's strategy provides fertile ground for the emergence of vaccine-resistant variants.
4. Fourth, this strategy will have a significant impact on health services and exhausted health-care staff who have not yet recovered from previous infection waves.
5. Fifth, as deprived communities are more exposed to and more at risk from COVID-19, these policies will continue to disproportionately affect the most vulnerable and marginalised, deepening inequalities."
The full article is well worth the read.
This image lays out the Johnson pattern. 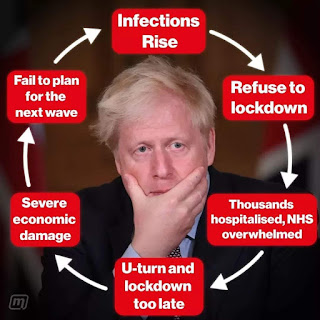 A disease requiring a socialist solution!
That is what is underneath the globalised Neo-Liberal rejection of Elimination Strategy, and the kicker is they know this.  They are conscious of this.
They reject Elimination because it verifies the social material validity of genuine socialism. The Human species  thrives best when we co-operate in our care for one another.

Without hosts, it dies out.
This virus learns from every new situation it meets, but without hosts it cannot learn new tricks. hosts it dies out.
The Johnson Government is determined to provide the virus with the maximum numbers of hosts, based on spurious claims of 'protecting the economy'. Elimination strategy, I repeat, prevents all the harms associated with Mitigation policy, including the economic harms. This has been proven beyond any doubt.
Every country that stops the spread in the community (with  efficient well resourced Elimination strategy - Find, Test, Trace, Quarantine, Isolate, Treat and Support) is doing that which the virus cannot surmount.  It cannot live if it cannot find new hosts.

Trying to live with this virus is epidemiological stupidity.  It is inviting  trouble, indefinitely.

In this pandemic, every State as a dual duty of care

1. The resources must be made available to stop the spread of the virus within their own population, to protect their own people and economy - this is what Vietnam, Norway and New Zealand are doing.
2. Never knowingly export the pathogen- this is a duty of care to other states, to the global community of Humanity.  That means tightly quarantined borders for people. This does not have to impact freight trade to any significant degree of disruption. Extra care yes, major disruptions no.

These duties of care are eminently do-able. They can be met. They must be met.

The evidence is that these dual duties of care are being met, 1.8 billion people are being protected, and their economies are being protected and they are not being subjected to mass infection, huge levels of disease, chronic long term disease and fatalities, with immense economic harms that follow from repeated national level shutdowns.

They are being placed at risk by those countries that have rejected Elimination Strategy, States and their Governments that chose instead to attempt to control slow spread of the virus, mitigation aka living with the virus.

Such control is impossible. It is not possible to manage 'slow spread' of this infectious virus.

Denial is not a river in North Africa.

In England, the primary obstacle is the English Conservative and Unionist Government, the news media, Parliaments inability to confront the Government with the evidence that elimination strategy works best, by every measure and the proliferation of misinformation and woo. That's quite an obstacle.

The English Government of today remind me of the English Government during the Irish and Bengali Famines. They say the same kinds of things, make similar promises they do not intend to keep, and they accept the collateral damage the citizens must bear, for them to remain in Power.

I have argued last year that the behaviour of this English Johnson Government is malfeasance in public office, with lethal consequences for hundreds of thousands of people, serious long term adverse health issues for millions. and economic harms for tens of millions.  I argued they should be arrested, charged, indicted and held on remand and a government of national unity installed to operate a proper elimination strategy in order to prevent further harms. I argued that when the death toll was still under 30,000 and we had minimal public data on Long Covid. I was, sad to report, correct. I hate that.

What must we do to rid ourselves of this lethal Government?

"Do what you love, it is your gift to universe."
Email ThisBlogThis!Share to TwitterShare to FacebookShare to Pinterest
Labels: Delta Variant, elimination strategy, Johnson Variant

One thing that I rarely hear, or never hear for that matter, is the connection between our toxic lifestyle (including vaccines and overuse of prescription medications) and the appearance off his virus.
Our trees are dying in the case of Ash and Larch (2 of our most precious renewable resources), the earth is struggling under the pressure of our toxic lifestyle - and we are too.
The earth can’t take any more free market, profit incentivised economic action. It is weakened, and so we are weakened.
I really appreciate your point of view as this ties in well with my desire to see humanity revolutionise the way that we live on the planet and look after one another.
We NEED to live locally and think globally. Never before has this been more true.
Big Love to you brother and thanks for all you do. X

Could not agree more! This blog is spot on.