Johnson: "Protect the Hoard, let the Herd take it on the Chin." The consistent policy under all the confusion. 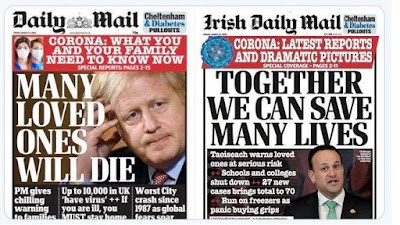 Boris Johnson, on February 3rd 2020, in a speech about Brexit to an audience in Greenwich, laid out the UK response to the SARSCOV2 pandemic in no uncertain terms.

Bear in that that the UK Government and Health officials had already received detailed warnings from WHO and other bodies of the COVID19 epidemic in China, and the ongoing pandemic across South East Asia, which was by this date already emerging within the UK.

The first cases of COVID19 in the UK were from a Chinese couple who had just  returned from China, who fell ill in Newcastle; their status as COVID19 was announced January 30th, they had been ill a week already.. Other cases were soon to follow, and it was know that cases were emerging across Europe. Point being that by February 1st, a global pandemic situation was known to be emerging, all Governments were alerted.

This is the official transcript from Johnson's speech on February 3rd.

"And in that context, we are starting to hear some bizarre autarkic rhetoric, when barriers are going up, and when there is a risk that new diseases such as coronavirus will trigger a panic and a desire for market segregation that go beyond what is medically rational to the point of doing real and unnecessary economic damage, then at that moment humanity needs some government somewhere that is willing at least to make the case powerfully for freedom of exchange, some country ready to take off its Clark Kent spectacles and leap into the phone booth and emerge with its cloak flowing as the supercharged champion, of the right of the populations of the earth to buy and sell freely among each other.

And here in Greenwich in the first week of February 2020, I can tell you in all humility that the UK is ready for that role.

We are ready for the great multi-dimensional game of chess in which we engage in more than one negotiation at once and we are limbering up to use nerves and muscles and instincts that this country has not had to use for half a century."

Protect the hoard, let the herd take it on the chin.

Here is the video of that speech.


https://youtu.be/baWbWpOtJnc?t=536 - this link starts from Johnson's mention of Corona Virus.

Here is a more detailed report from Byline Times.

Byline times have another excellent piece outlining the link between UK Military Intelligence, The Behavioural Insights Team led by David Halpern and the 'behavioural sciences' quoted by the CMO Chris Whitty and the Government Science Adviser Sir Patrick Valence.

I have already outlined in some the dynamics of  'protect the hoard, let the herd take it on the chin' in some detail, based on my observations and the evidence available prior to the discovery of this piece, which came to me via www.joe.ie   on facebook on Saturday 17th of April.

In the early party of Johnson's speech he refers to the painting on the ceiling of the Greenwich Hall, and this chimes with my observations of the linkage between this situation, and that of the Late Victorian Holocausts in Ireland and India, the continuation of the attitude and the behaviour - the actions, outcomes and rationalisations - of British Empire Logic.

The Vatican has Michelangelo.

Greenwich has Thornhill who spent 20 years flat on his back on top of the scaffolding, so rigid that his arm became permanently wonky, and he’s left us this gorgeous and slightly bonkers symbolic scene that captures the spirit of the United Kingdom in the early 18th century.

This painting above you was started in 1707, the very year when the union with Scotland was agreed – and does it not speak of supreme national self-confidence?

Look at these well-fed nymphs and cupids and what have you.

They are not just celebrating the Triumph of Liberty and Peace over Tyranny – the official title of the scene.

This is the settlement of a long and divisive political question about who gets to sit on the throne of England.

And it is visibly resolved as you can see in favour of William and Mary and the result is stability and certainty and optimism and an explosion of global trade propelled by new maritime technology."
There you have it.

This is a very serious situation.

We need  the UK policy to move from slowing the spread to stopping the spread. This will call on all citizens to understand the situation as it really is, and to engage in what it will take to stop the spread of the infection, and in due course eradicate it from the UK population.

The slow spread policy is pretty much guaranteed to lead to waves of infection outbreaks, which in time could well lead to +100,000 deaths, possibly +250,000 - horrific deaths of people with chronic illnesses, trauma, disability etc, whose immune systems are compromised, including also those living in close confines such as care homes, prisons, temporary accommodation on council housing waiting lists, the homeless and many others  - in the UK that demographic is close to 5,000.000 people.

We NEED to stop all incoming air. land and sea travel or impose a two week quarantine of all incoming passengers, at hotels near the airports, monitored by health workers and police.

We need to fully equip NHS and carer staff with PPE and other essential tools to protect themselves.

We need to institute contact tracing, quarantine, treatment in isolation (not at home) where interventions can prevent escalation of cases into critical more readily.

We need to start the full protocols for stopping the spread, for protecting NHS and other vulnerable demographics. That means workers must be supported for the duration, by a temporary Universal Basic Income rather than Universal credit, to bear the burden, and that money will flow back into the local economy.

We cannot allow another day of "protect the Hoard, let the herd take it on the chin" as the official policy of the UK and it's peoples.

We might well need Parliament to reconvene to remove the PM, the entire Cabinet and Cummings, and the BIT team led by David Halpern, and I would suggest go as far as arresting them for gross malfeasance in public office, (their policy decision and actions, their rationalisations of what they have been doing goes way beyond incompetence) to be held on remand until we have stopped the spread of the viral infection, and eradicated it from the UK population. They are already  obfuscating and getting in the way, and cannot be trusted to do what needs to be done.

We can address their culpability in detail when our vulnerable population are safe.

Thank you for reading this blog. All we need to do is be really honest, responsive to the evidence we find,and ready to reassess when new evidence emerges. The rest is easy.
Email ThisBlogThis!Share to TwitterShare to FacebookShare to Pinterest
Labels: BREXIT, bullies, care homes, covid19, death, herd, hoard, Johnson, sarscov2