'Upstarts' in the Labour Party? 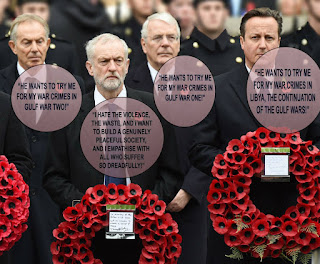 "we don't like honest people being honest about our behaviour"


'New upstarts'? was what one pundit Mefia commentator said of the Momentum group within the Labour Party.

People who he suggests are intent on taking over and destroying the Labour Party from within, a surge of insurgents, an anti-demcoratic horde of ranting idealists, who will NEVER gain power, and will condemn Labour to infinite futility. That's the general mainstream view, the 'public opinion' as manufactured by the Moguls of Mordor and Murdoch.
So let me tell you who I think some of those people are...
A generation of people who were 14 -16 or so when the adults, their parents, teachers, mentors, celebrities etc allowed the British Government to invade Iraq. And their parents, mentors and communities.
They are in their late 20s now, fully adult and effing furious with our generation, their parents and grand parents, who failed to stop that invasion, (largely because we were fixated on home ownership and wealth 'creation' which drove inequity ever deeper in the UK) when the evidence at the time was clear.

A general strike would have been enough to bring the British State involvement in Iraq to a halt. It was mooted at the time but dismissed without a rational debate.

We marched, and then went home....
No WMD, Regime Change 100% illegal, War of Aggression 100% Illegal, no association with 9/11 and a country that had been bombed for more than a decade vs the mightiest military on Earth..... all this info was easily available on line at the time. To those who made the effort.
Those ADULTS that did not seek out that information, but relied upon 'opinion' have by default enabled that War Crime and appear to be wholly unwilling to confront that and have left a mess that the children of 2003 and their contemporaries in Iraq, Syria, Libya, Afghanistan and elsewhere are all too aware of - that is how these 'upstarts' see matters and they are correct.
They see the previous generations are too timid to call out the bullies, the bullying system.
It's also valid to point out that mere opinion is not the same as evidence or data.... and thus mere opinion is not sufficient when making decisions that affect other peoples lives so deeply, so harmfully.

All of these are inadequate to the task of genuine democracy, which is the administration of our shared resource, taxation, for the equal benefit of all people in our society.
You would not accept a brain surgeon operating on the basis of 'opinion' - you would want data, evidence, precedence and insurance... and absolutely due diligence and duty of care....

Most of what is published as fact in mainstream media is mere opinion. Donald Trump's ascendancy is a direct result of submission to mere opinion. Likewise Hilary Clinton's nomination by the Democrats, who were proven to have acted amorally and possibly illegally in their fight back against the people who lifted Sanders...... Brexit was another victory of opinion over evidence.

It's immature to base decision making that affects peoples lives on mere opinion, and it is also careless, irresponsible and feeble.
If I was in my 20's or 30's now I'd be utterly, utterly disgusted at my parents generation. And terrified of the future they have bequeathed me and my contemporaries.
'New upstarts. - HOW DARE YOU!

Most people I know in their teens, 20's and 30's see clearly that the old system of Governance is corrupted, it is a bully system and they fear for their futures as people of good heart (above and beyond home ownership and jobs...) and they are furious, frustrated, appalled and deeply saddened by the way the previous generations of people with such privilege have failed to honour their children's futures....

And you ain't seen nothing yet. These are not young 'idealists' - they live with the reality in a way previous generations do not.... connected, international, global, tolerant, caring, compassionate and robust in their thinking, superbly well informed.

*If you like this post, if you found the themes resonant, if you agree in part, would you be kind enough to let others know about it? I would really appreciate that. You could drop a comment too, if you felt the urge. Or not. I will moderate contributions, and block any that are abusive. For obvious reasons. Thank you for reading.
Email ThisBlogThis!Share to TwitterShare to FacebookShare to Pinterest
Labels: bullies, Government, Hillsborough, Labour, Momentum, peace, war crimes